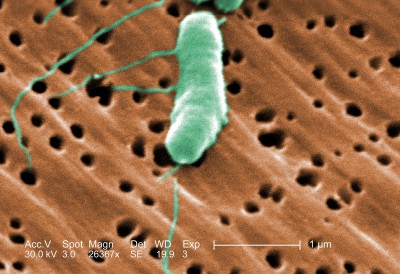 As the water warms up, be aware of the little bug with a big bite. It is the most insidious threat facing coastal anglers in the United States. With a death rate of up to 30 percent, this force is not only deadly but is invisible to the naked eye. It is Vibrio , a bacteria that thrives in saltwater and annually catches numerous anglers by surprise in terrifying fashion. According to the Centers for Disease Control and Prevention (CDC), Vibrio is a rod-shaped bacteria that occur naturally in estuarine or marine environments. Roughly, a dozen species are known to cause disease in humans, accounting for thousands of illnesses, hundreds of hospitalizations and even deaths annually.

There are two main strains of Vibrio inhabiting water systems throughout the country. The most common is Vibrio parahaemolyticus , bacterium in the same family as those that causes cholera, which is often spread through raw oysters and other raw or undercooked seafood. It lives in brackish saltwater and causes gastrointestinal illness in humans. The strain that grabs headlines and is often referred to as “flesh eating bacteria” is Vibrio vulnificus. The CDC says that Vibrio vulnificus can also cause disease in those who eat contaminated seafood, but is most often contracted by those with an open wound exposed to seawater. It is known for spreading with incredible speed and for its intense destruction of tissue, which often ends up in loss of digits and amputation. An estimated 4,500 cases of Vibrio parahaemolyticus infection occur each year in the United States. However, the number of cases reported to CDC is much lower because surveillance is complicated by underreporting. Laboratories rarely use the selective medium that is necessary to identify this organism, and it is likely that many cases are undetected. Vibrio vulnificus is rarer, but it is also underreported.

Between 1988 and 2006, CDC received reports from the Gulf Coast states, where most cases occur but before 2007 there was no national surveillance system for it. According to the Gulf Coast Research Laboratory (GCRL) at the University of Southern Mississippi, every Gulf state from Florida to Texas has reported Vibrio vulnificus wound infections in recent years.

In 2012, in Ocean Springs, Mississippi, Joseph Smith contracted Vibrio while fishing and physicians had to remove his leg. In Florida, there were nine deaths in 2012 and 13 deaths in 2011 attributed to the bacterium. At Grand Isle, Louisiana there were several cases of wound infections of Vibrio vulnificus that resulted in hospitalization and one death. Retired Texas fishing guide Capt. Skip James said Vibrio served as a real wakeup call for him during the early 2000s. “All of a sudden we started hearing about this ‘flesh-eating bacteria’ and saw photos on the Internet of the damage it caused and it was really terrifying, especially at first,” James said. Having had a client who had previously contracted the infection after puncturing their skin with the horn of a shrimp, it became a little more personal. “After hearing that story, I realized we did things every day in our boat that could open us up to trouble. I mean we never fished with any live bait but we were always getting little cuts or occasionally sticking ourselves with a hook,” he said. “It really made me think about safety so we started looking more at keeping things extra sanitary. We always ran a clean ship, so to speak, but this made us really examine things. After all the photos we were seeing looked like some kind of zombie plague or something. Scary stuff.”

Vibrio causes an infection called necrotizing fasciitis, which results in open wounds, major tissue damage and death, hence the name “flesh-eating bacteria.” According to the CDC officials, the mortality rate of persons affected by V. vulnificus associated necrotizing fasciitis is about 30 percent. “Most cases of infection were reported during summer months. Clinical features of necrotizing fasciitis may include intense pain, redness, swelling and rapidly developing tissue destruction. The skin changes can start at the site of injury as trivial as a small cut or bruise, while in other cases there is no obvious source of infection. The level of pain is out of proportion to the visible skin changes,” the CDC reports. The infection can also affect dogs and, in fact, the first time I heard of “flesh-eating bacteria” was when Larry Hyde of Port Arthur, Texas, reported his dog came down with it. “The dog came back from a retrieve with a little cut. Before we got to the boat ramp, it was severely swollen and just looked terrible,” Hyde said. The dog survived but the vet bill was several thousand dollars.

According to GCRL officials, during the winter populations of Vibrio vulnificus are lower and present less threat to the general public. As temperatures rise, it multiplies. Warmer weather also brings coastal residents and visitors into contact with the water which increases the chance of encountering the organism. Infections are seasonal; more than 85 percent occur between April and October. In comparison to the number of people using coastal waterways whether they fish, swim, boat or dive, this condition is indeed rare, but that doesn’t mean it can be dismissed. As anglers, we know that small details matter and with newfound knowledge on the subject, we can save ourselves potential problems just by being extra cautious and observant. Of course, it is going to sting when you stick yourself with a shrimp horn and getting jabbed by a hardhead is going to cause swelling. Both however can be ways Vibrio enters the body so any extra pain or swelling or anything out of the ordinary should inspire you to see a doctor immediately. The bacteria spreads incredibly fast and while common antibiotics treat the infection very well, they must be administered quickly.

If you’ve been in saltwater and a cut or bruise starts to get red and hot, don’t go to bed and tell yourself you’ll check it in the morning. That could easily be too late. Don’t underestimate the power of V. vulnificus . If you do find yourself in an emergency room with a suspicious wound after a day of fishing or playing at the beach, be sure to tell the medical personnel that you were in saltwater. Since it is so rare, doctors aren’t always quick to identify what is happening without that vital clue. I’ve heard stories of sleepy docs and nurses springing into action at the mere mention of “saltwater” and “ V. vulnificus.” As in most things, prevention is much preferable to the cure. Pay attention to warnings posted along the coast for water conditions that may be ripe for trouble. If you see that bacteria levels are high, you might want to avoid fishing that area. These details are often available through local health and or water monitoring services like the Galveston County Health District in Texas, for example. V. vulnificus is out there, but that doesn’t mean we should avoid the water or live in great fear of this hidden menace. We simply need to proceed with knowledge, and use caution anywhere the water runs salty and even just a tad bit warm. Chester Moore is an award-winning outdoor writer/author/radio host from Orange, TX. He is Editor-in Chief of Texas Fish & Game and co-founder of the Kingdom Zoo: Wildlife Center.