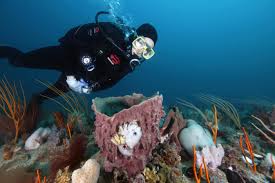 Gray’s Reef National Marine Sanctuary, one of the largest near-shore “live-bottom” reefs of the southeastern United States, will be the focus of the CCA of Skidaway’s June meeting and seminar to be held on Monday, September 14, at St. Peter’s Church beginning at 7:00 pm. Featured speaker Cathy Sakas, a professional interpretive naturalist and founding chair of the Gray’s Reef National Marine Sanctuary Foundation, will discuss how the Reef relates to Coastal Georgia.

Gray’s Reef is currently the only protected natural reef area on the continental shelf off the Georgia coast and one of only a few natural marine protected areas in the ocean between Cape Hatteras, NC and Cape Canaveral, FL. The approximately 22 square mile sanctuary (about 14,000 acres, located 16 miles east of Sapelo Island between Savannah and Brunswick) of Gray’s Reef is just a small part of the U.S. territorial Atlantic Ocean, yet its value as a natural marine habitat is recognized nationally and internationally. While direct access to the reef requires experience in open-ocean diving, the Sanctuary is popular with recreational anglers, boaters and more experienced divers.

Cathy Sakas’s lifelong love of the ocean began at age three when a huge wave knocked her face flat onto the beach thereby sealing her respect for the ocean’s awe-inspiring power and fostering a lifelong fascination of it and ultimately advocacy for it. She holds a B.S. in Biology and a M.Ed. in Science from Armstrong State University. Beginning her career in 1976 as a professional interpretive naturalist, she specialized in ocean and coastal environments while leading educational wilderness expeditions into remote tropical and sub-tropical environs. She has served as Education Coordinator of NOAA Gray’s Reef National Marine Sanctuary, has been certified as a pilot of one-person submersible DeepWorker 2000, and been an Aquanaut, spending nine days in Aquarius, an underwater habitat, to research coral reefs off Key Largo. She’s a co-founder of Ocean Exchange and founding chair of Gray’s Reef National Marine Sanctuary Foundation, raising thousands of dollars to support ocean science, education, and ocean and coastal issues.