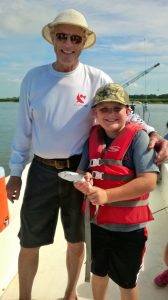 This week of Marine Science Camp, the focus was fishing for fun for 36 very interested 11-12 year old campers. They first received a short on-shore demonstration of rigging tackle and safe fishing techniques. Then, for three days they went out in boats with six campers and two staff or volunteer leaders in each boat. John Duren of CCAGA helped them plan the fishing experiences and helped the young anglers on one boat each day. Happily, every camper caught at least one fish and most caught a lot of fish. Sharks, whiting, and rays were the most common fish caught but there was lots of action. Since it was a catch and release experience, catching fish was more important than the species so expectations were exceeded for every camper. There were lots of smiles as the campers learned about sport fishing and how it relates to sound ecological practices.